Last week, I spent another day at the National Archives in Den Haag, gathering yet more images. While it is important to work as efficiently as possible on a research project, sometimes a little gambling is good. I initially had no plans to check the file concerning a financial dispute that arose between the first Dutch ambassadors to the new English state, and the Staten Generaal. However, it turns out that the dossier contained a wealth of details about the day to day operations of the embassy, right down to the fact that they had hired a trumpeter.

Meanwhile, the embassy correspondence file was primarily concerned with boring – at least to me -admiralty disputes. However, about a third of the way through the stack, I came across something that was interesting: a letter in French from the creditors of “Elisabeth par la grace de Dieu Reÿne de Boheme Electrice Palentine du Rhine – neé Princess de la Grande Bretané.” It seems they believed that the Interregnum English government should cover her highness’s debts, and they wished for the Dutch diplomats in London to arrange matters. Now, I’d run across references to Elisabeth’s debts before, so that was not really the exciting part. The cool bit came afterwards. Between the sheets of paper lay the small pouch in which the documents had apparently been kept. I have fondled a lot of old paperwork over the years, but I have never had the opportunity to handle an everyday object that old. It was one of the highlights of my month. 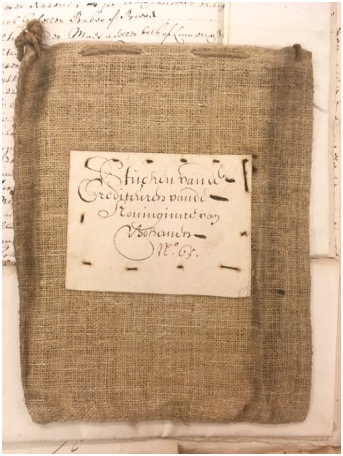 Obviously the financial file is going to be of more importance to my research, but finding things like the document pouch keeps me going when I feel like I’m becoming bogged down.