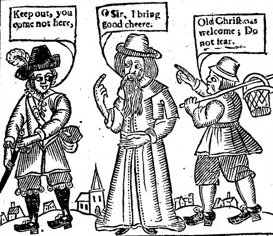 The English like to party – as anyone who has watched The Crown on Netflix knows. This was also the case in the mid-seventeenth century, during the English Interregnum, as noted by the Spanish Ambassador in London, Alonso de Cárdenas. In his Relacion de las Fiestas, que hizo en Londres, a 16 de Henero, 1653, held in the collection of Merton College library in Oxford, he describes a feast he held in honor of recent Spanish victories. In it, he writes about the throng of visitors that crowded into his house for celebration, and the dancing that lasted until midnight, causing the temperature to rise so much so that

“it caused fainting in some people, and whoever was able to, broke the windows, for the fresh air to enter. They didn’t notice the damage, because they valued the relief more.”

Nor did they stint on the food,

“everyone liked, gave, and took, and with regard to these three everything without speed, nor limit […] progressing until the day. The English like to enjoy feasts, and festivities, and having such an occasion, it does not seem to him that they should lose it.”

As an American, I learned very few things about Oliver Cromwell in school. I was taught, in fact, three things – two of which are patently untrue, and one of which I am – after a fashion – researching. First, that he killed the king of England. Second, that he would have succeeded in establishing a Republic in England had he not decided to adopt the trappings of a king cum dictator. Third, that he was a mean old man and religious fanatic who abolished Christmas and turned England into a joyless country the likes of which Ebenezer Scrooge or Kazran Sardick would consider a veritable paradise. This last ‘fact’ is the subject of this research blog, which is dedicated to all of my furry, green, Seuss-like friends complaining that now that Halloween is just past, people are already banging on tong-tinglers, blowing their foo-flounders, and crashing their jang-jinglers.

Parliament began to regulate English holidays in the 1640s, and published its first act ‘banning’ Christmas in 1647:

Resolved by Parliament,
That the Markets be kept to Morrow, being the Five and twentieth day of December, And that the Lord Mayor, and Sheriffs of London and Middlesex, and the Justices of the Peace for the City of London and Westminster and Liberties thereof, do take care, That all such persons as shall open their Shops on that day, be protected from Wrong or Violence, and the offenders be punished.
Resolved by the Parliament,
That no Observations shall be had of the Five and twentieth day of December, commonly called Christmas-Day; nor any solemnity used or exercised in Churches upon that day in respect thereof.

This was well before Cromwell assumed the office of the ‘Lord Protector’ in 1653, or even before he had emerged as a strong man in the furor English politics during the Civil War. While he did ban the celebration during his invasion of Ireland, it was only after Parliament had done so in England. Moreover, it seems that people largely ignored the act of 1647 – even after Parliament had seen off the Stuarts. Writing on January 4, 1652, Lodewijck Huygens notes that it was Christmas of 1651 in London according to the Old Style calendar, and he went on to describe what members of the Dutch embassy did that day:

“we heard the sermon at home in the morning, although by order of this new government, the celebration of this holiday (which formerly was enormously popular) had been completely abolished. Nevertheless, we noticed that little heed was paid to this prohibition, for we saw that all the shops were closed and there were few people in the streets and scarcely any coaches. Parliament, the Council of State, and other similar bodies had assembled just as usual.”

Indeed, there are numerous indications that the English intended to go on celebrating Christmas whether Puritan zealots wished it or not. For one thing, the government had to keep reminding people that it had been banned. The act of 1647 was reiterated in 1652, and then Parliament had to rapidly order its enforcement. The editor of the Weekly Intelligencer reported that on December 29, 1652

“concerning the suppressing of the solemn meetings, on the Day commonly called Christmas Day. It was this Day ordered, that the Lord Mayor be desired to take all especiall care that the Ordinance for the observation of other Holy-dayes be duly, and effectually put in execution, within the liberties of the City, and London, and to give protection unto all Persons that shall follow their lawfull callings in their shops, as well in these dayes commonly called Christmas Holy-dayes, as all other Festivals abolished by Act of Parliament, and to prevent, and to restrain all violent opposition that shall be made by any Persons whatsoever”

Huygens noted in his above journal entry that while going about the city, they had found a booklet entitled Reasons why Christmas ought to be celebrated. In fact, the subject of the Christmas ban seems to have been a popular one among London pamphleteers. And the defense of the holiday could also provide opportunities to criticize the government and the Civil War in general, as was the case with another such pamphlet, published in 1652, and titled “The Vindication of Christmas, Or, His Twelve Years Observations upon the Times.” In it, Father Christmas describes his travels through London and the countryside and the people he encountered, claiming that

“my best and freest welcome with some kinde of countrey Farmers, was in Devonshire, where though both Armies had been with them, and given them several visits, insomuch that if the Cavaliers had taken their horses, the other party made bold with their Oxens; so that (according to the country phrase) great crock and little crock, all was ago; yet as soon as they spied me, they saluted me with much love and reverend courtesie.”

Clearly, people were still celebrating the holiday, and there was even a concern that those who did not want to celebrate would face violence. But perhaps the best indicator of the true attitude among the general public towards the ban, was that even the rabidly anti-Royalist editor of the Mercurius Politicus took no small joy in reporting that in 1652, the impoverished Charles II, living in exile in France, “hath kept but a cold melancholy Christmass, without any sports save a Game at Cards, and a dinner that he had on Thursday.”

Whether there were actual prosecutions or persecutions of those celebrating or not celebrating before the Restoration, I do not know. But the ban remained the ongoing subject of some mirth in the press. The Grand Politique Post in January of 1654 reprinted a cheeky letter sent from Hereford stating that

“I am to inform you, that those in authority in this city, on Christmas Eve last, sent to all the Bakers in and about the city, to charge and prohibit them that they should bake no Pies on Christmas day; but whether for fear of burning or baking them too hard, I know not.”

Manganiello, Stephen C. Entries “Act Banning Christmas” and “Christmas, The Banning Of” in The concise encyclopedia of the revolutions and wars of England, Scotland, and Ireland, 1639-1660. Lanham: The Scarecrow Press, 2004, p. 5 and p. 133.